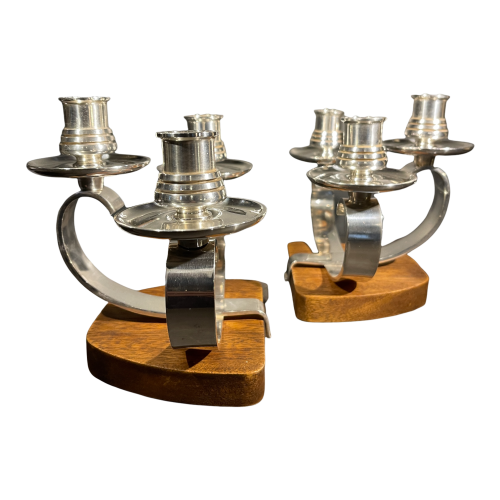 Rare pair of Art Deco candelabras by the Belgian and Swiss silverware firm Wiskemann, circa 1930.
These candlesticks are originally mounted on mahogany bases still in perfect condition.
Very atypical by their shapes, the assembly is qualitative, they are heavy of quality (2,8kg).
We are not used to seeing such an Art Deco creation from the House of Wiskemann, but we have looked for a long time...
Complete, stamped and in good original condition.

Biography:The O. Wiskemann Goldsmith's and Cutlery Factory was founded on 15 July 1872 by Otto Leonhard Wiskemann, who came from a long line of silversmiths from Kassel. Originally, the company was located in the heart of Brussels, in the small Rue des Longs Chariots. From 1900 onwards, he brought his sons Otto and Albin Wiskemann into the management of the company. In 1907, Otto Leonhard Wiskemann built a second factory in his hometown of Zurich. He wanted to take over the management of this factory and leave the management of the parent company to his sons. Although his death in 1909 prevented him from realising his plans, Otto and Albin Wiskemann continued their father's work by establishing sales branches in several large cities in Belgium, and in France from 1910. A third factory was built in Milan the same year. In 1920, they chose the industrial area of Forest, then in full expansion, to build a modern and well-equipped factory covering 12,000 m2. Wiskemann Goldsmiths won numerous awards at the World Fairs that followed until 1958. In 1944, the company was partially destroyed by bombing. In 1974, the British group Derek Hartle Limited, which had become the majority shareholder following a takeover bid, undertook a complete modernisation of the Forest factory, and its recovery plan soon had a major impact on the goldsmith's business. Bankruptcy was declared on 9 March 1984.
Often compared to Christofle for its quality...