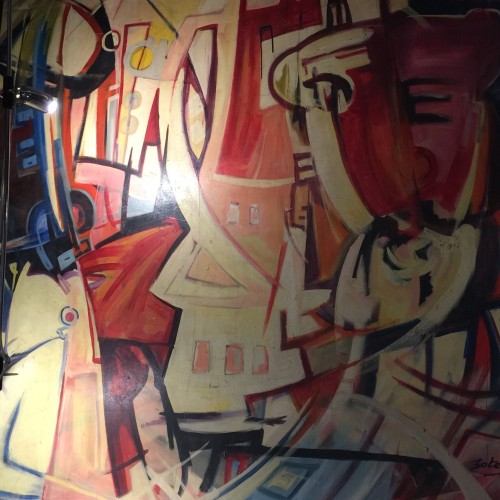 Born March 4, 1959 in Kinshasa, in the Democratic Republic of Congo, Roger BOTEMBE is a painter graduated from the Royal Academy of Fine Arts in Belgium in 1986 and very famous in Congo and in Belgium. He began his career with the creation of his workshop and a Congolese school of contemporary African art. His research in abstract pictorial art led him to explore symbols, signs, masks and traditional sculptures. He exhibits a lot in his country, but also outside and especially in South Africa, Belgium, Monaco, Poland. The quality of his work earned him the honor in 1986 of the Prix d'Excellence of the city of Brussels and the Gold Medal of the Belgian Government, of the "Prix Charles Buls" of the city of Brussels, of the Prix de the Embassy of Paraguay, and the Prix du Musée d'art contemporain de Louvain la Neuve (Belgium).

He worked in 1981-1982 in the workshop of Samir Zarour in Abidjan in Côte d'Ivoire at the National Institute of Arts in Abidjan and obtained the 2nd degree diploma in monumental painting from the Royal Academy of Fine Arts in Brussels.

Since 1990, he has occupied, in his country, the position of chief of works of the Academy of Fine Arts; and from 2006, that of Director of International Cooperation and Promotion, at the Institute of National Museums.

In 1992, he founded the Ateliers Botembe, a Congolese school of contemporary African art. Associate Professor and Head of Plastic Arts Section at the Academy of Fine Arts in Kinshasa and Director of International Cooperation and Promotion at the Institute of National Museums of Congo since 2006, he is the founder in 1999 of trans-symbolism , current of the Renaissance of contemporary African art.