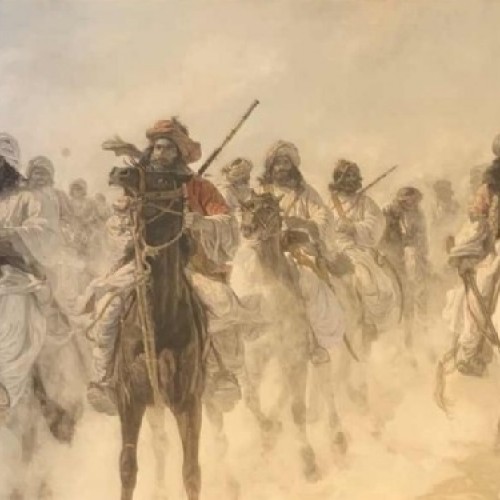 Cavalcade of horses known as "Fantasia" and Maharaja in a desert in India in 1900.
Etching in arabic aquateint by the Orientalist painter John Roderick Dempster MacKenzie signed in the decoration lower right (see image N16) and published after R&S, see stamp in the lower right margin (see print photo N15) around 1900.
Rare, large and in good condition, a small stain to report, see images N ° 13.

We have not found any trace of this painting or of this engraving edition but we can see this original painting in very large format behind the artist on a period photo (see photo N ° 16).

Orientalist painting refers to themes, to oriental conceptions, perceived by the West. Thus, in the 19th century, artists often represented harem or combat scenes, typical landscapes, revealing the splendor of these societies.
Just like the great Arabist painters like Eugène Delacroix, Eugène Fromentin, Théodore Chasseriau, Gustave Guillaument, Félix Ziem, Léon Belly, Henri Emilien Rousseau, Mac Kenzie had as his favorite subject: the 'Fantasia', the horse and equestrian scenes, the Maharaja, camel caravans, elephants ...... when he was in the East.

Biography;
John Roderick Demspter MacKenzie was born in London in 1865 and trained from 1884 to 1886 at the School of the Museum of Fine Arts in Boston, he left London to continue his training in Paris in 1889. In 1891, he left for Calcutta in India ( Maharaja Cooch Behar) at the request of art dealers where he gained international fame and hailed as "the most skillful artist in Asia". Upon his return to America, he painted Alabama. He died in 1941 almost penniless.


References:
The Maharaja's Water Carnival
The Brahman Priest and his Victims
The Munshi Palace
Pundit Expounding the Sacred Writings
The Manikarnika Ghat
The burning Ghat
The Maharaja of Benares
The Maharaja's Boat