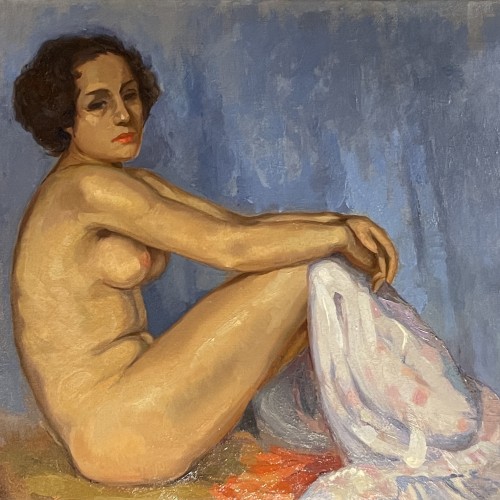 Biography:
Born in Saint-Josse-ten-Noode in 1871, Gustave Max Stevens is a painter of portraits, landscapes and still lifes, he also practices lithography and pastel. He was a pupil of Jean-François Portaels at the Brussels School of Fine Arts from 1886 onwards and stayed there for four years in painting class. He then studied under Fernand Cormon at the École des Beaux-Arts in Paris.
In 1893, he co-founded and chaired "Le Sillon" in Brussels, an artistic circle composed of young artists from the Brussels Academy who wanted to counterbalance neo-impressionism. They advocated a return to the rich tradition of Flemish realist painting, with an emphasis on light effects. These painters used a rich and increasingly luminous palette and showed a preference for the use of thick layers of paint that were applied more like a palette knife than a brush.
Gustave Max Stevens exhibited at the first Idealist Art Salon in 1896 and at the Salon des artistes français. He contributed to the French magazine L'Estampe moderne (1897-1899) which featured 4 original lithographs in each issue. At the Universal Exhibition in Paris in 1900, he won a bronze medal.
Initially influenced by the English Pre-Raphaelite movement, he evolved, following a trip to Algeria and Tunisia, towards a more personal style close to Impressionism. He produced Orientalist works on this occasion.
Considered a painter of Belgian Art Nouveau, he died in Brussels in 1941.