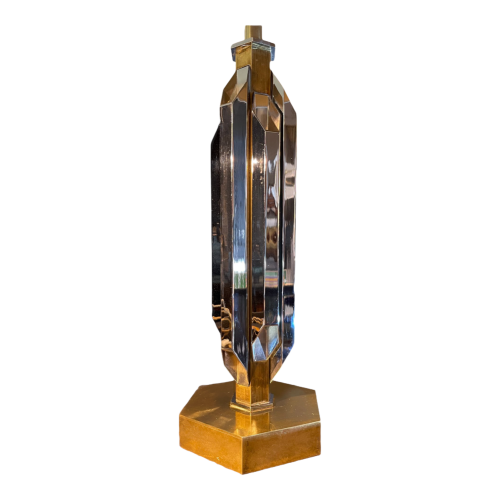 Qualitative table lamp, Brutalist Hollywood Regency style.
Lamp base composed of a hexagonal gilded bronze base surmounted by an assembly of "Organ Pipes" style tubes in chromed metal.
A sliding rod allows the height of the shade to be adjusted.
In very good original condition., Rare model.
Awarded to Designer Willy Rizzo or Romeo Rega (Mario Sabot or Cidue edition) in the 70s.


Biography Willy Rizzo:
The Italian designer and photographer Willy Rizzo (1928-2013) made a name for himself in the 1960s as a photographer, during the 1970s he developed a passion for interior design and launched a second successful career as a designer of luxury furniture. Born in Naples in 1928, in the 1940s, he began his career as a journalist. His reputation continued to grow and it wasn't long before he was hired by France Dimanche to portray the rich and famous at events like the Cannes Film Festival. The charm of Willy Rizzo opens the doors of royalty and dignitaries to him. has photographed dozens of stars, including Brigitte Bardot, Maria Callas, Salvador Dalí, Marlene Dietrich, Jane Fonda, Gene Kelly, and Gregory Peck. He also befriends famous personalities like Coco Chanel, Christian Dior and Jack Nicholson. In 1962, he captured some of Marilyn Monroe's last moments. In 1968, Willy Rizzo began his career as a furniture designer in Rome, starting in his own apartment. At first for simple personal use, Willy Rizzo created a series of unique pieces inspired by modernist icons like Mies van der Rohe and Le Corbusier. He gained an international reputation as a designer for the rich and famous. His team has 150 employees and he opens stores in France and across Europe, as well as in New York, Miami and Los Angeles.