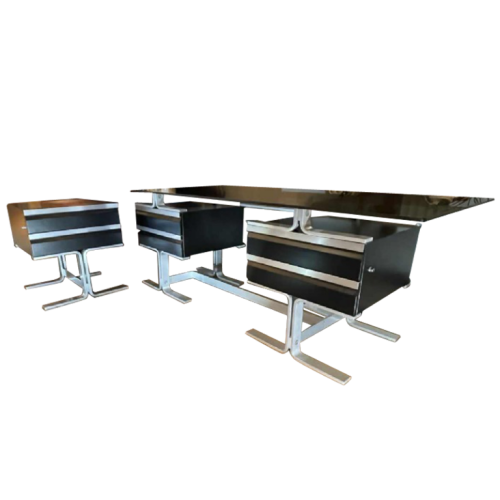 Important and rare desk made by Walter & Moretti, French Designers (Paris) in the 1970s.
Composed of three black lacquered wooden drawer units, the "skeleton" structure is entirely made of solid brushed aluminium, topped by a "Saint-Gobain" smoked glass shelf, easily dismantled.
A timeless design and a pure line... for a contemporary interior.
Marked on the bottom rail with the 'Walter & Moretti' stamp (see photo).
In perfect condition, this desk is almost impossible to find...

Not to be confused with the architect Luigi Walter Moretti, Isaac Walter and Giancarlo Moretti founded their own design studio "Walter & Moretti" in Paris in the early 1970s.
Like Maria Pergay, Etienne Fermigier, Michel Ducaroy and other French designers of the time, Walter & Moretti invented and created their furniture in a very personal, futuristic, brutalist and modernist style in high quality brushed aluminium. As shown on the documents of the time (see photo), W&M will also create this incredible Lounge Chair, this 'spatial' chess set immortalized by Karpov himself, the futuristic desk lamp 'Colomba' whose 'pebble' switch is simply removable... just magical!

"In 1969 Neil Armstrong walked on the moon. The following decade was profoundly marked by the imagery of the conquest of space, which influenced a whole generation, in all fields, from Paco Rabane metal dresses to industrial objects that invaded the home. Metal is part of the flagship of French industry and its use extends to the world of decoration. Take a look back at François Catroux's flat with its aluminium-plated fireplace; recall the reception counter at the Rothschild Bank designed by Michel Boyer in 1970." (Text written by Pauline Da Costa Sampieri)