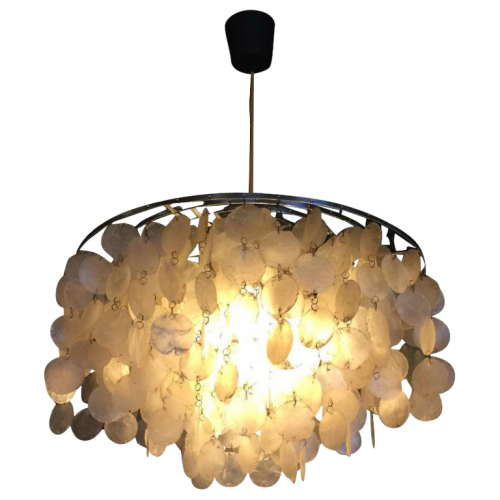 Total length with cable: 50 cm, changeable at will, just change the length of cable.

I will take care of adapting the length according to your request.

Verner Panton, born February 13, 1926 in Gentofte and died September 5, 1998 in Copenhagen, is a Danish designer, considered one of the most influential of the 20th century. Panton liked to develop variations on the same theme. Starting from the possibilities of exploitation of the characteristics of the natural materials, he had made disks in mother-of-pearl for a series of luminiares, the models "Fun", often also called "Mother of Pearl". Clinging to chains and grouped around a light source, these semi-translucent and satin-colored discs sparkled and diffused a magical light. The FUN range (1964) includes suspensions, floor lamps and table lamps, the discs being either grouped in a mass, or suspended from two or three concentric rings, staggered in circles of increasing diameter to give the impression of a Iridescence waterfall.

Panton was passionate about plastics and other new materials, which he exploited to create brightly colored geometric shapes inspired by Pop Art. In 1959, he created the Cone Chair, which led to a number of orders and partnerships with manufacturers. In 1960, he developed the first collection of inflatable furniture and began to create futuristic "total environments" in which walls, floors, ceilings and furniture were treated in a unifying aesthetic.

In the early 1960s, Panton moved to Basel and began a long and fruitful relationship with Vitra, with whom he developed the iconic Panton Chair.