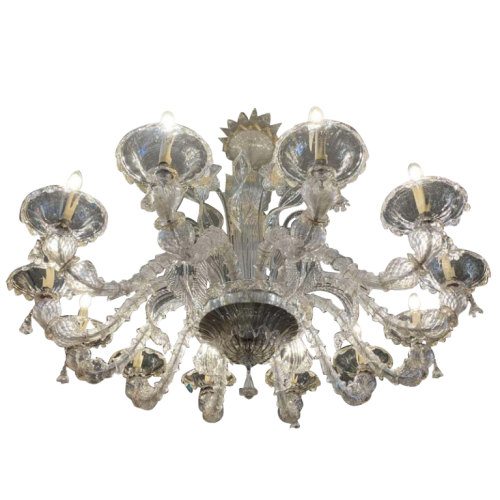 Important and rare Venetian chandelier (Murano) in baroque style with 12 arms of light, around 1900.

Attributable and in the spirit of the SALVIATI family factory (Antonio, Giulio, Sylvio), bought in 1883 by Maison Barovier & Toso.

Colorless glass slightly gilded, this chandelier is made up of about 250 elements in blown and drawn glass.

In very good state of conservation

Disassembles and reassembles quite easily but with delicacy

Biography:
The Salviati story begins in the mid-1800s, when Antonio Salviati reorganized the entire glass industry in Venice. After the tremendous success of Murano glass in previous centuries, Venice has watched with concern the decline of the industry. Antonio Salviati engaged two great minds to manage his project: Lorenzo Radi and Enrico Pondio. With them, "Salviati Dott. Antonio fu Bartolomeo ”opened its ovens in 1859 in the Dorsoduro district of Venice. Quickly becoming an innovator in the field, he started his own production of glasses, bowls, vases and chandeliers in 1877 with the help of master glassmakers such as Antonio Camozzo and the famous Baroviers. Salviati then took his innovative works to the 1862 World's Fair in London, which earned him to work for the most emblematic institutions of London such as the Parliament and Saint Paul's cathedral. Salviati then decided to divide its factories: some would be used for the production of mosaics, others for the production of blown glass. Antonio Salviati died in 1890, leaving his empire to his sons Giulio Salviati and Silvio Salviati. After being bought by the Barovier family in 1883, the company was headed by Maurizio Camerino, a young master glassmaker who started his trade with the Salviati family, leading the company in the 20th century. During the 1950s, Salviati collaborated with contemporary designers such as Anish Kapoor and Tom Dixon ....