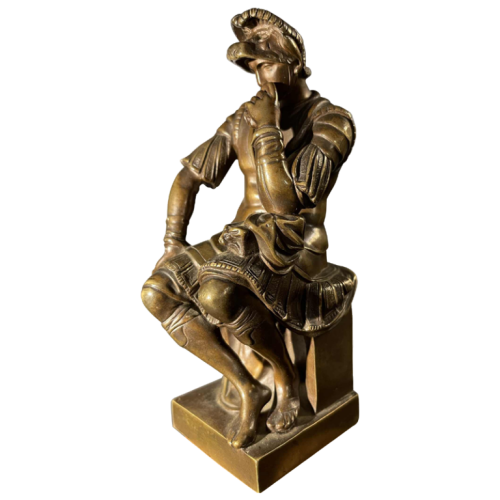 Sculpture " Seated Man " in Bronze by Ron Liod SAUVAGE, sculptor active in France in the XIXth and XXth centuries, cast by H. LUPPENS (Brussels), circa 1890.
Based on the original "Lorenzo de Medici" marble model in the Medici Chapel (Church of San Lorenzo in Florence), by Michelangelo between 1526 and 1534.
Very qualitative proof, brown patina, signed by the artist and the founder.

Lorenzo de Medici:
In 1520, Michelangelo was commissioned by the Medici Grand Dukes of Tuscany to design a family mausoleum. This figure represents Duke Laurent de Medici, grandson of Lawrence the Magnificent and nephew of Pope Leo X.
The decoration of the funeral chapel of the Medici was commissioned from Michelangelo in 1520 by Cardinal Giulio de 'Medici, who became Pope Clement VII (1478-1534). The figure of Lorenzo (1492-1519) seated in a niche above which rest allegorical figures of Dawn and Twilight. On the opposite wall is the figure of the companion of Lorenzo's uncle, Giuliano de 'Medici, Duke of Nemours (1478-1516).