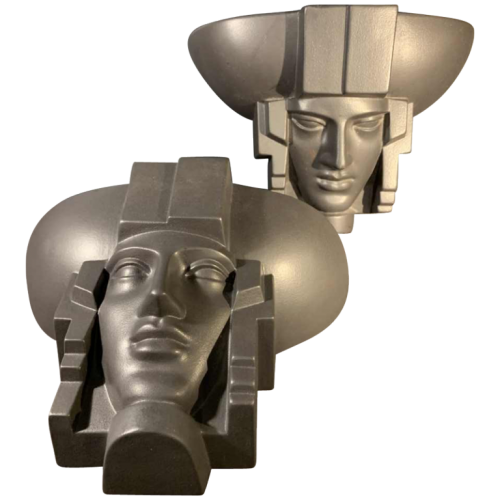 The Lunéville - Saint-Clément earthenware factory has been the heir to the prestigious Lorraine earthenware since the 18th century: Lunéville and Saint-Clément. The Lunéville factory was founded around 1730, while that of Saint-Clément was founded around 1758, making it the oldest pottery still in operation today.
From 1816, earthenware gradually passed into the heritage of the Thomas family. She will thus collect a gold medal at the Exhibition of French Industry Products in 1844. She then takes part in the Universal Exhibition of 1855 in Paris, then in the Universal Exhibition of 1878 still in Paris, where the manufacture exhibits all of his know-how which will attract Émile Gallé in particular. However, success was no longer there, which forced the manufacture to be put up for sale. It was bought in 1892 by the Keller & Guérin earthenware factory, its former parent company.
At the end of the 10th century, Baron Maurice de Ravinel, relative by marriage of the Kellers, set up an art workshop at the factory which was particularly interested in flamed stoneware and effect enamels. Ernest Bussière, Edmond Lachenal then Louis Majorelle will introduce the concept of Art Nouveau.
The beginning of the 19th century saw the arrival of the Art Deco period with artists such as Charles Lemanceau, Géo Condé, Geo Maxim, Émile Bachelet, Desbarbieux, Thomas Cartier and Georges Chevalier who produced in 1921 the first artistic models for the Maîtrise (Galeries Lafayette). The Mougin brothers will thus confirm the fame of the earthenware factories, in particular thanks to the success of sales to the various art workshops of the department stores (Primavera, Pomone, la Maîtrise.). Today, the prices of certain parts can soar in auction sale.