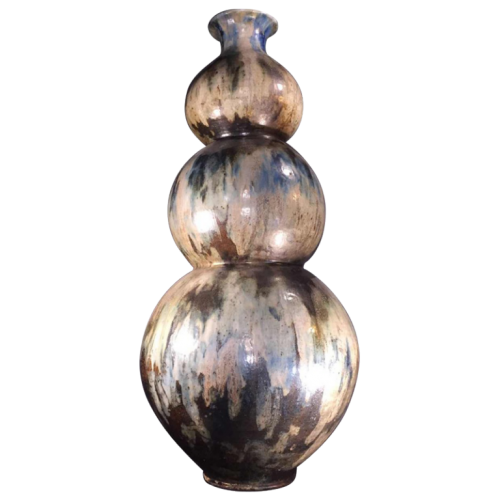 ROGER GUERIN (unique piece), 102 cm museum and monumental vase, circa 1920.
Flamed sandstone known as "salty grand feu", in the form of "coloquinte", trilobe type.
Signed on the side, in the mass under cover (see photo), the vase is pierced under the piece.

Roger Guérin (1896-1954 ) is a Belgian ceramist (Bouffioulx) of great renown from the 20th century, especially from the Art Deco period. and friends of Edgard Aubry.
He was born in Belgium in 1896 and shows, from an early age, a keen interest in ceramics. He enrolled at the Charleroi Labor University, yes, he took courses in "pottery" with Willem DELSAUX.
Going from the Art Nouveau period to Art Deco (between 1915 and 1945), he created vases and sculptures in "GRES SALE GRAND FEU" in a single firing (1300 °). He therefore evolves with talent in the two artistic styles of his time.
From 1934 to 1939, he was appointed PROFESSOR at the Superior University of Decorative Arts at CAMBRE in BRUXELLES.
Perfect in his achievements, he will be contacted for numerous artistic collaborations and will publish pieces for recognized artists (Belgian and foreign) such as Marcel Wolfers, Cris Agterberg (Amsterdam School Netherlands), Thierry Van Rijswijck, Domien Ingels, Cris Lebeau (Amsterdam School Netherlands), Angelo Hecq ... Vases with a wrought iron frame are the fruit of collaboration with François Carion, creator of light fixtures and lamp bases for the French crystal glassworks Muller Frères Lunéville.

He participated in numerous exhibitions and notably obtained the silver medal at the INTERNATIONAL EXHIBITION OF DECORATIVE INDUSTRIAL AND MODERN ARTS OF PARIS in 1925. His recognition being international, we find him in 1947 at the JENSEN GALLERY in NEW YORK.