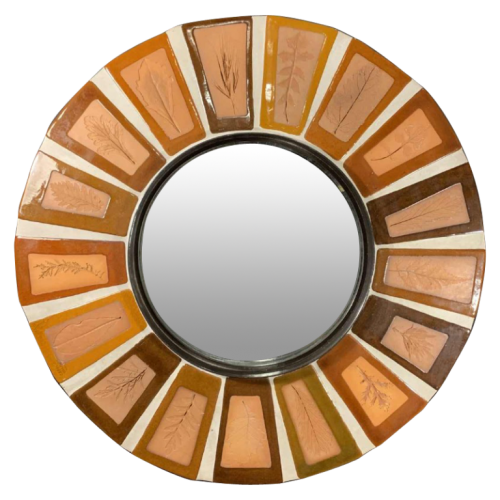 Biography:
In 1946, he moved to Vallauris, where he created a ceramic workshop, Callis and joined forces with Robert Picault then Jean Derval in 1948, thus participating in the renaissance of ceramics in Vallauris where he implemented the motto of his master, René Gabriel, "make beauty accessible to all".
In 1952, Capron bought a disused pottery from Vallauris and produced objects and decorative panels there. From 1955, he began the production of earthenware and table tiles.
His creations are recognized and rewarded: gold medal at the X Triennale in Milan in 1954, silver medal at the Cannes international exhibition in 1955 (the city ordered him in 1956 for a 150 m2 ceramic banner for the maritime station), gold medal in Brussels in 1959. He rubbed shoulders, in 1950 in Vallauris, Pablo Picasso who did not hesitate to support him at the time of the controversy on the fresco of the Cannes maritime station.
From 1962 began a collaboration between Capron and Jean-Michel Carré. They exhibited side by side at Bâtimat in 1963.
The architect Philippe Sicardon entrusts Capron with the production of ceramic decorations that adorn the Byblos hotel in Saint-Tropez.
Capron received in 1970 the international grand prize for ceramics.
Around 1990, Roger Capron began a totally new work with unique pieces, close to sculpture. Helped by his wife, Jacotte, and Jean-Paul Bonnet, the lifelong collaborator, he opened a small workshop in Vallauris, and created baked pieces (smoky earth technique) for galleries around the world.