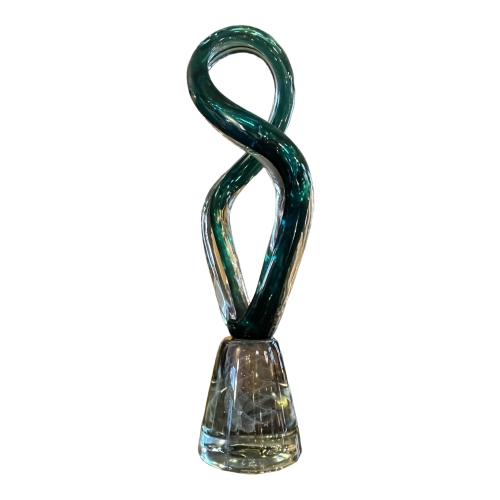 Important glass sculpture (70cm) made by Robert Pierini, signed and dated under the base in two places "R. Pierini 1995" and "R. Pierini 1996".
Work of transparent, green and blue twisted glass, the base is filigree.
This piece was bought from Gérard Siewert "Galerie Cimaise d'Or" in Luxembourg where the artist had exhibited several exceptional pieces including vases and sculptures (see photo of the invoice and brochure). These documents will be given to the buyer, the piece was bought 90.000 Luxembourg Francs in 1998...

Biography:
Robert Pierini is one of the most famous French glassmakers. He was born in 1950 in Toulon and did his apprenticeship at the Biot glassworks, under the direction of Eloi Monod, before joining forces with three friends to take over a glassworks in Montauroux in the Var.
In 1980 he became independent and set up his workshop in Biot in an oil mill where he continued his research. During the day, he produces utilitarian objects for sale and, in the evening, he experiments and begins to create unique pieces (vase or sculpture). He studied the ideal proportions based on the famous golden ratio, and worked with the inherent qualities of glass, its ability to reflect or absorb light, its transparency or opacity...
He was soon successful, and collectors and art dealers recognised his talent. Major international exhibitions, personal or collective, in France, Switzerland, Belgium, Austria, Germany, but also Japan, Canada or the United States will also establish his reputation.
Since the day the Vieux Moulin glassworks was founded, thirty years have passed, the "Ateliers Pierini" have grouped together several artists, including Antoine Pierini (Robert Pierini's son), Beloï TANTA, Antoine BRODIN, Nicolas LATY. Enough to compete with Italian (Verreries de Murano), Scandinavian (Kosta Boda), Belgian (Louis Leloup) glass masters...