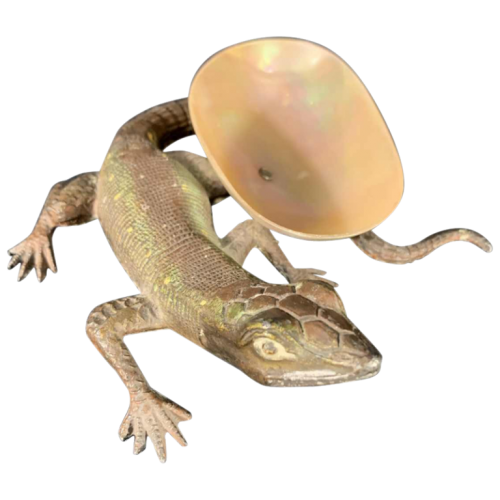 Vienna Bronze:
Franz Bergmann (1861–1936) was the owner of a Viennese foundry which produced numerous miniature sculptures depicting oriental, erotic and animal figures patinated in bronze (fanciful, humorous humanized works of art).
His father came to Vienna and founded a small bronze factory in 1860. Franz Xaver Bergmann inherited the business and opened a new foundry in 1900. Many bronzes from the 1900s were still based on designs by the his father's workshop. His workshops employed, on a temporary basis, many anonymous sculptors including Bruno Zach who asked Bergmann to edit and cast some of his works, including some erotics signed "Prof. Tuch", a pseudonym used by Zach.
At the turn of the 19th century, there were around fifty similar workshops in Vienna producing 'Viennese bronzes'. “Cold painted bronze” refers to pieces cast and then decorated in several layers with so-called dust paint, usually made by women working at home.
Many animals such as musical signs, hares, bears, foxes, frogs, lizards ... made the reputation of this factory. The sensual poses of young women in the Art Nouveau or Oriental style were discreetly disguised by clothing or drapery that revealed when a button was pushed or a lever moved ....
Other sculptor artists. also worked in workshops in Vienna including Bruno Zach, Ferdinand Preiss, Franz Josef Starek, Carl Kauba, some carry the Argentor Vienna brand ...

Contact me about this item   Back to home   Back to Others