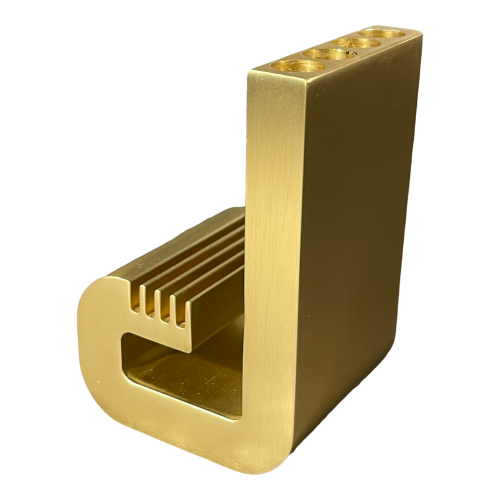 Modernist Letter and Pen Holder, Brushed aluminium and gold sculpture.
Office accessory made by Pierre Vandel, probably for Pierre Cardin in the 1970s.
Has a label "Pierre Vandel Made in France" under the base (see picture).
In perfect condition.

Biography:
Pierre Vandel was born in 1946 in Roubaix, France.
Designer known for his sober design furniture (table, desk, chair, light...) created in the 1960s/1970s. He trained in assembly and industrial design, then joined the research team at the École nationale des ponts et chaussées and the École nationale supérieure d'arts et métiers in Paris.

He designed luxury furniture such as coffee tables, chairs, storage units and other objects made in the 1970s and 1980s. Pierre Vandel's pieces are characterised by smooth and polished designs made of black lacquer, aluminium, Lucite and glass.
The company is still in business today, but it is mainly the pieces produced in the 1970s and 80s that are popular on the vintage market today.