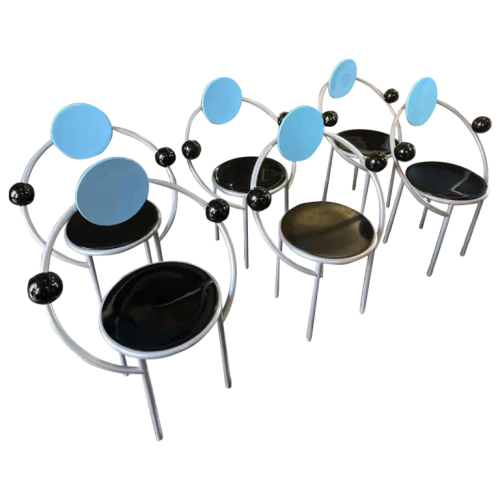 Comfort assured by a backrest judiciously mounted on a flexible ball joint.
Very good condition, some scratches on the arms (see photo) but we are currently working on it...
Note that only one of the 6 chairs is stamped "Memphis Milano Made in Italia".

Notice to the avant-garde!

Michele De Lucchi (1951, Ferrara, Italy) is an Italian designer and architect known for his membership in the Memphis Group, a movement that influenced design in the 1980s.
He studied in Padua and then at the University of Florence under Adolfo Natalini, where he graduated in 1975. In 1973 he founded the Cavart design and architecture group, which promoted Radical Design. In 1978 he worked in the Kartell design studio in Milan, where he met Ettore Sottsass and participated in the first Memphis exhibition. In 1979 he designed a large number of post-modernist prototypes with radical forms for domestic use.
One of De Lucchi's best-known designs is the First chair, produced from 1983. It has a tubular steel frame and the seat, back and armrests are made of painted wood. But also the iconic Tolomeo desk lamp, created for Artemide in 1986...