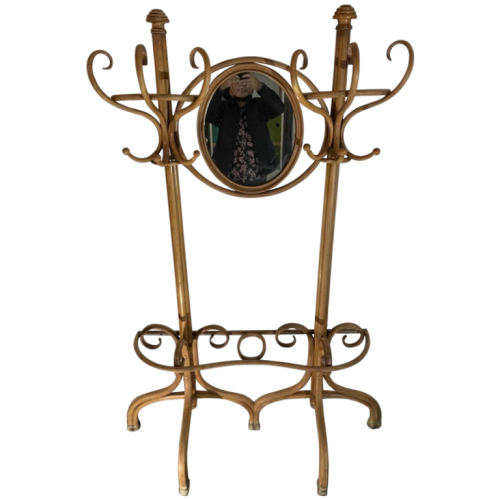 Certainly the most beautiful of the coat racks produced by the Viennese House Thonet Gebrüder (Brothers) in the 19th century.
Double coat hanger, umbrella stand and mirror at the same time, made of curved and hot bent beech wood.
Rare model N ° 1 and in superb condition, designed by Michaël Thonet.
Dry storage (perfect curls and not relaxed), original screws and caps (see photos)

Michael Thonet is a German-Austrian cabinetmaker and industrialist born in 1796 in Boppard and died in 1871 in Vienna.
He was one of the first to industrialize the production of bentwood furniture in the 19th century, a revolutionary process.
Michael Thonet created a small furniture company in 1819 and experimented with assemblies and ways of bending wood.
In 1851 he decided to create a new company, where he developed the emblematic bistro chair n ° 14, commissioned by Anna Daum, director of the Daum café, who dreams of "practical, elegant and space-saving chairs". It was a success, orders followed very quickly, and Thonet decided to produce No. 14 in series; it will become his first industrial model and will make his success, even bearing his name.
In 1851, at the Universal Exhibition in London, Thonet received the Bronze Medal. In July 1856, the factory moved to Koryčany in Moravia, a region very rich in beech forests, also allowing it to employ cheaper labor. The factory employs 300 workers and produces 200 pieces of furniture per day. He opens a second site in Bystřice pod Hostýnem.
When he died in 1871, his company had six factories in Europe, which supplied 14 retail stores around the world, Paris, Chicago, New York ... When the patents expired, Thonet would be copied (Kohn Frères, Cambier, Fisher ...) The Thonet company and the Kohn company will edit for great designers and architects such as Josef Hoffmann, Gustav Siegel, Le Corbusier, Koloman Moser, Marcel Kammerer, Otto Wagner, Anton Lorenz, Josef Urban, Adolf Loos....

In 1920 Thonet merged with Kuhn-Mundus and in 1945 Gebrüder Thonet's headquarters were in Frankenberg, Germany.
In 1976, the Austrian branch became Thonet Wien and in 2006 Thonet Gmbh.