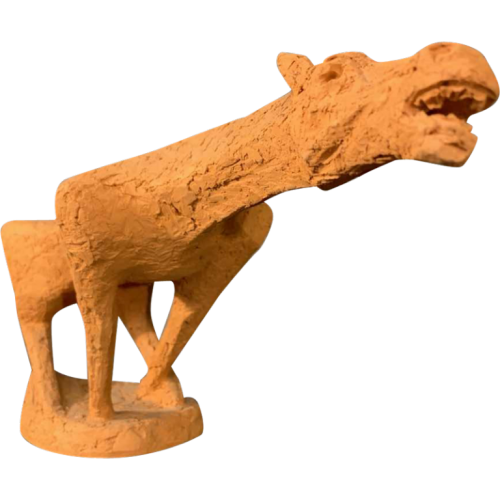 Expressionist, Abstract and Brutalist sculpture of a Horse made by Mario Peruggini in the 1950s / 60s
Unique piece
In perfect condition

In the Style of Olivier Strebelle ( Cheval Bayard )

Biography:
Born in 1923 in Italy, he trained in drawing and ceramics at URBINO and moved to Belgium in 1947 where he continued his training at the Industrial Commercial and Drawing school in Châtelet. He then studied with Alphonse Darville at the Académie des Beaux Arts de Charleroi. He was then hired in 1952 by Roger Guérin as a sculptor, modeler and moulder where he was responsible for making architectural pieces.
In 1957, at Crame-Crame in Chatelineau where he specialized in works of a sculptural nature.
He then became a Professor at the Academy of Fine Arts in Charleroi and ended his career there.
He exhibited in 1965 at the 38th Salon de Charleroi .....
He sometimes signs his works with the monogram "MP"

Animal sculptor, he sculpts animals in tense and improbable positions (bull, horse, dog).
The woman is also one of her favorite subjects (bust, trunk, naked woman)