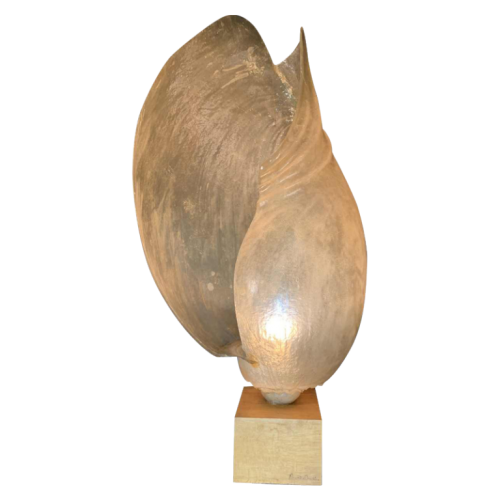 Rare piece and stamped from the "il mare" series including the models: LIMNEA - MITILO - NAUTILUS

Remarkable realization in polyester resin of fiberglass type, wooden base.

This model is the largest LIMNEA: 1.2 m high.

Interior designer, decorator and costume designer from the 70s to the present day, she never ceases to amaze. Marika Carniti Bollea is also called “the Lady of Interior Design”, this tireless and very elegant lady wrote important pages in the Italian history of interior design and architecture. Born into a noble Genoese family, she frequented Milan in her youth and in particular La Scala, where she met Maria Callas, Renata Tebaldi and the maestro De Sabata.

She travels the world meeting artists and architects of international renown, she then begins to devote herself to design, committing to revive artisanal design, ignoring the industrial.

Marika Carniti Bollea has pursued throughout her career as an interior designer or rather, as an inventor of houses, a constant principle: to seek and develop the playful aspect of things with the greatest seriousness, consistency and commitment. , to such an extent that she conceived her profession of interior designer as a risky and playful operation which constantly climbs the dangerous ridge of Kitsch without ever crossing the threshold beyond which elegance becomes ostentation ....