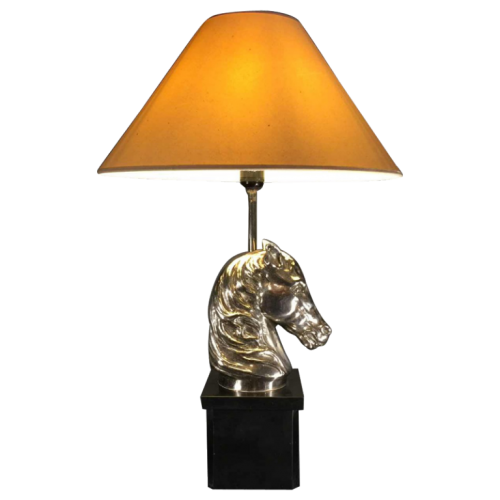 Rare alpaca table lamp also called nickel silver (bronze and silver alloy that has the advantage of not yellow) on marble base (Noir de Mazy) attributable to the Maison Jansen in Paris (see perhaps Maison Charles in Paris .. .).

The horse's head is imposing and of quality.

Maison Jansen is an interior design house located in Paris. It was founded in 1880 by the Dutch Jean-Henri Jansen. Jansen House is considered the first global design firm to have made its name a brand, offering its services in Europe, Latin America, North America and the Middle East. In the early 1940s, Maison Jansen created its own workshops on 17000 m2 rue Saint Sabin in Paris. Throughout its history, the firm has used the traditional European style of drawing but has also followed the European trends in this field, including the Viennese Secession, Modernism and Art Deco, which were developed by the firm between 1920 and 1950. Under the direction of Boudin, Maison Jansen worked for the royal families of Belgium, Iran and Serbia but also for the White House under the administration of John F. Kennedy. Jansen House has decorated the yacht Chambel IV, now known as NorthWind II.Jansen worked for HM Elizabeth II, HM Edward VII, HH Edward VIII (now named after the Duke of Windsor) and his wife Wallis Simpson, LLMM of Spain Alfonso XII and Alfonso XIII, the court of Holland, the palace of Laeken, Lady Baillie, Persepolis, Qatar, the Royal Palace of Belgrade, Coco Chanel ...