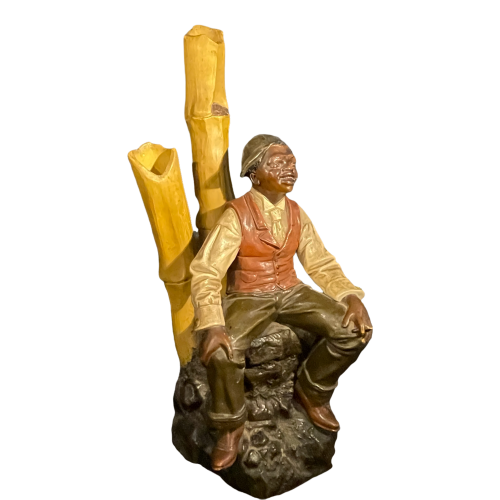 "The Break" sculpture of an Afro-American man at rest, Austrian clay by Johann Maresch. No. 6489, ca. 1890.
Subject representing a black boy / man sitting on a rock, bamboos in the background, cigar in hand.
Two soliflorous vases are provided in the bamboos...
In perfect condition.
In the manner of Haniroff for the Viennese terracotta sculpture factory Goldsheider...
Bibliography: Terres cuites orientalistes et africanistes 1860-1940, Stéphane Richemond, 1999, page 101.

Biography:
Johann Maresch: Siderolithic - Majolica - Terracotta - Manufacture in Bohemia (known dates: 1841 - 1948).
Johann Maresch was born in 1821 and joined forces with Adolf Baehr around 1841. The Baehr and Maresch Siderolith Fabrik was located at the corner of Teplitzerstraße and Johannesstraße in Aussig an der Elbe. Reinhold Hanke worked there as an apprentice modeller between 1853 and 1858.
Originally they marked their articles with B & M, but around 1863 they switched to the famous JM markings. They used an ironstone clay mixture: a type of porcelain that was more durable and had more strength and weight than fine porcelain. Their production was large and their products were shipped all over the world. In 1890, Ferdinand, his son, took over the family business and for nine years kept the name of the factory. He finally changed it to Ferdinand Maresch. Siderolith, Majolika and Terracotta Fabrik.
He did not, however, change JM's distinguishing marks. In the early 1900s, the company flourished under his leadership, exporting to the rest of Europe and America. The factory was run by Ferdinand until his death on 2 August 1940. The factory continued to produce its ceramic ware, but times were hard for Europe. The factory stopped production in 1944 and finally closed in 1948.