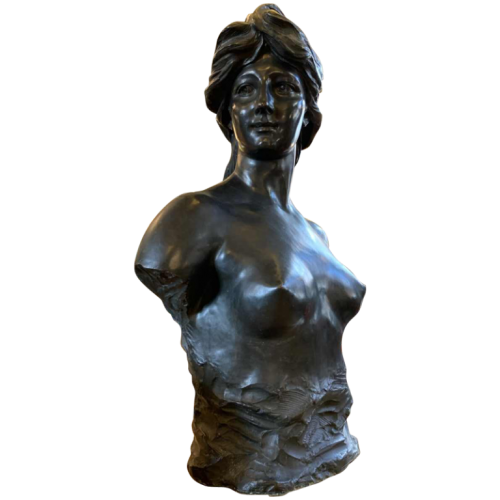 Biography
In 1883, Jef Lambeaux was one of the founding members of the avant-garde Brussels group Les Vingt. He is cited as a member of Freemasonry. His workshop was located rue de Savoie (destroyed in 1898), then at no. 104 rue Antoine Bréart (destroyed in 1977) in Saint-Gilles (Brussels).
Works
He notably produced Le Faune mordu shown at the Universal Exhibitions of Brussels (1897) and Paris (1900) but which was the center of a controversy over nudes at the 1905 Universal Exhibition in Liège where this work was covered with a veil.
Another major work: The Human Passions (1886), a marble bas-relief that was integrated into the pavilion of Victor Horta in the Parc du Cinquantenaire, for which he received a medal of honor at the Universal Exhibition of 1900 in Paris. He was made a member of the Royal Academy of Belgium in 1903. Since 1899, the relief of Human Passions has been the subject of praise and criticism.
Main works
1881: Le Baiser, at the Royal Museum of Fine Arts, Antwerp; Silvius Brabo, in Antwerp; circa 1890: Le Dénicheur d'aigles, at the Royal Museum of Ancient Art in Brussels; 1899: the Pavilion of Human Passions, is one of the first constructions of Victor Horta, built especially in 1899 in a classical style to house the monumental high relief of Jef Lambeaux Les Passions Humaines, which evokes the pleasures and misfortunes of the humanity. Three days after the opening, the work, daring for the time, which represents entwined bodies, provokes a real moral scandal ....