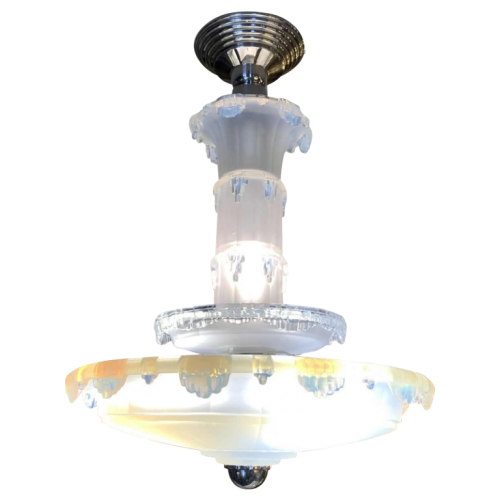 At the beginning of the 1920s, decorative opalescent glass objects (cups, vases, knickknacks, animal sculptures and figures of women) were created, and they were very successful. Some artists and companies will take advantage of this craze, note René Lalique, Marius Sabino, Jean Gauthier, Charles Ranc, Verlys, Etling, Petitot .... Some of them will produce chandeliers, table lamps, wall lights ...

EZAN (in Ezanville in France):
Jean Gauthier had his first workshop at 12-14 rue Jean Robert in Paris and then expanded with factories in the city of Ezanville. In the early days, just after the First World War, Gauthier made cameos which were sometimes signed Gauthier. The Ezanville factories were opened for the production of pressed molded glass art deco glassware. Many art deco models are unsigned. Some are signed EJG for Etablissements Jean Gauthier. Others are signed J.Robert, pseudonym of J.Gauthier based on the street name of the first workshop. In the 1930s, Gauthier launched a line of shades made in opalescent semi-crystal, mainly cuts. Some models are not signed. Others are signed EZAN France, signature for Gauthier based on the city of the second factory .... (cf Michiel Molenaar - Paravas)