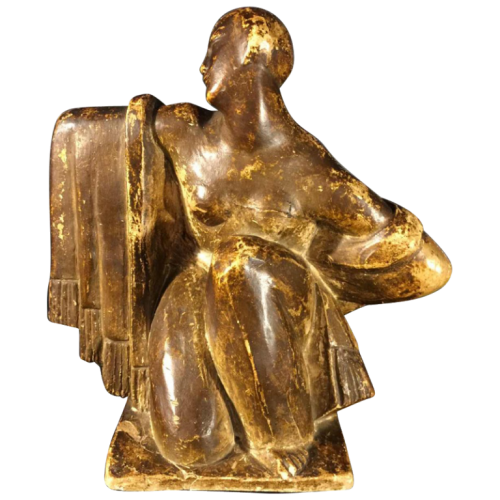 Sculpture from the BACKGROUND OF THE WORKSHOP OF ARTIST Jean Canneel and dating from the 1930s. It came to us via the family, documents available (another terracotta sculpture is available and visible on ArtaPlaza, same provenance).
It is a WORKSHOP PLASTER, a unique piece used for the edition of multiples in terracotta, bronze ... Corner of broken base and preserved in sticky paper (see photos).

Jean Canneel was a realistic sculptor evolving towards expressionism. Brother of Eugène, Jules and Marcel Canneel. Initially worked as an ornamentalist in G's decoration workshop; Houdstont in Brussels. Study at the Brussels Academy (Victor Rousseau, P. Du Bois and Ch. Van der Stappen). Makes portraits, but above all practices monumental sculpture. Professor and director (1933) of the Academy of Saint-Gilles. Sculptor of several monuments for our country as for the Belgian Congo and decorator of several public buildings. Succeeds in communicating in his work his sensitivity, his optimism and his enthusiasm. Creator among others of the Lancers Monument in Spa, the Memorial to the doctors at the Saint-Pierre clinic in Brussels. Works at the Museums of Ixelles, Kaunas, Riga and Tallinn.