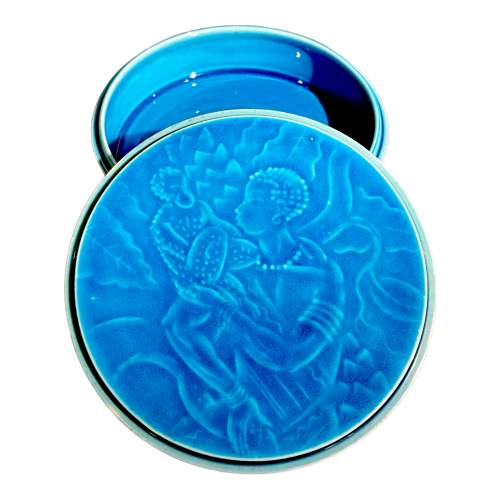 Biography:
Johannes Knud Ove Jais-Nielsen (Copenhagen 1885 - 1961) was a Danish painter, designer and ceramist.
Nielsen studied painting at the Kunstnernes Frie Studieskoler under Kristian Zahrtmann and Johan Rohde. Nielsen made several excursions to important art centres, Berlin (1909), Paris (1911-1914) and Italy (1920).
Nielsen's art was influenced in Paris by Art Deco, including cubism with a tendency towards futurism, and he tackled a wide range of subjects, as did many avant-garde painters, including Degas, Toulouse-Lautrec and Picasso. His work Circus Performance Acrobats (1916) depicts trapeze artists swinging weightlessly through the air. From 1921 to 1928, he was employed as a sculptor by the Royal Copenhagen porcelain factory, for which he produced a series of ceramic sculptures. His sculptures were widely acclaimed and for a time their fame overshadowed that of his paintings.
In addition to statuettes, Nielsen produced ceramic objects in a wide range of shapes and monochrome glazes, including celadon. These pots are decorated with figures, mainly in relief but also engraved or painted, the resulting figures have a modelling vigour and monumental effect that crosses the boundary between painting and sculpture.