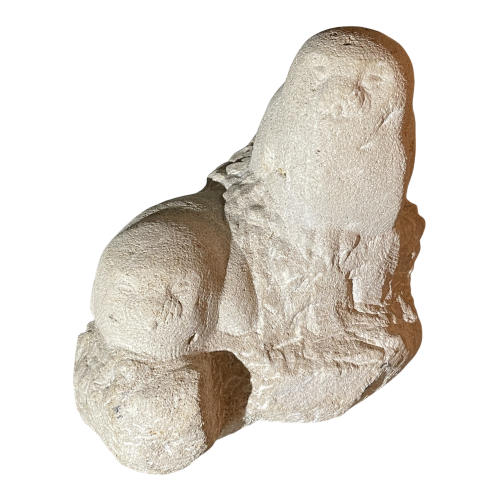 Herbert Geldhof (1929-2007) was a Belgian sculptor and cartoonist (in the weekly SPIROU: Simba Lee, The Karapata Reserve, Diego, Doctor Gladstone).
After graduating in technical drawing at the Tournai Academy, he went to live and work as a draughtsman and illustrator in Africa from 1951 to 1956. It was in Africa that he published 'SimbaLee' and 'La réserve de Karapata' in the weekly SPIROU.
When he returned to Belgium, he set up a studio in Brussels Saint-Gilles, where he painted portraits and animals from nature, in oil and watercolour.
From 1962, he took sculpture and modelling courses at the Academy of Ixelles with Maurice Jansegers. He mainly sculpted animals in plaster, terracotta, bronze... (note a lion, a bird of prey, a hippopotamus, a monkey, a bear, a hawk, a bird...) but also in stone (direct carving), the raw spirit of the 20th century.
Herbert Geldhof made numerous sculptures, both figurative and animal. He is best known for his rough sculptures in direct carving, which are difficult to produce and give no room for error.
His works can be found in various private collections and museums, including the Tournai Museum.