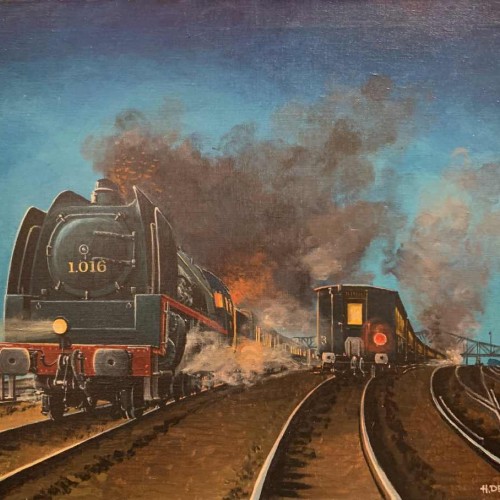 Born in Schaerbeek (brussels) in 1939, he trained at the Brussels academy, designer, illustrator by profession. The dimension of this artist's talent was little known until recently, the bulk of the paintings are today scattered in institutions and in many private homes. He lived for more than 20 years in China for professional reasons, despite this he took the time to make many paintings, 211 of which are visible on the site www.amelotomb.be. It seems that painting was his passion, while being recognized worried him less. "How could a painter of such stature remain in the shadows?" Henri Dethier was sensitive to atmospheres, he is a past master in the art of restoring them, exaggerating them or even inventing them. He also masters the light and sometimes intensifies it, probably inspired by Paul Delvaux. He also has an art of detail to such an extent that it sometimes approaches the realism of a photo. From 1970, he painted trains and trams, inspired by the Belgian railway. Until March 2015 there was no way to access his work, now it's done, you can find 211 of his works on the site www.amelotomb.be, including this one.