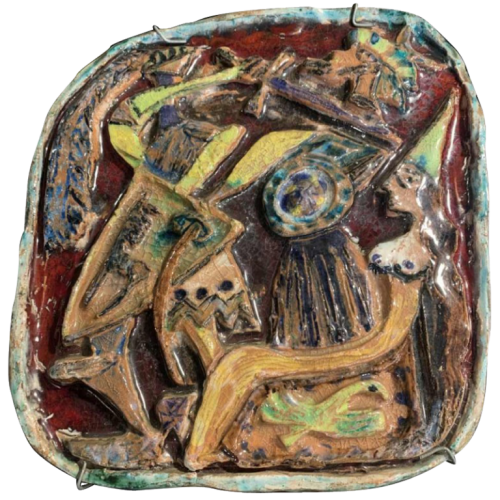 His original works are quite rare, unlike the family production which is still active today.

G. De Simone was born in 1930 in Palermo in Sicily, during his childhood he will travel with his parents in Somalia, which will inspire and upset his primitive work.
The "De Simone" Ceramic Workshop started its activities in the 1960s, producing tiles and larger decorative panels, later crockery and serving pieces.
He was inspired by Pablo Picasso, Fernand Leger and Henri Matisse and Gauguin whose influences are obvious, primitive abstract ceramics see Fauvists, his bright colors .... He represents scenes of Sicilian folk art.
DeSimone died in 1991, but his legacy continues through his daughters Susanna and Margherita, who operate La Fabbrica della Ceramica; still located in Palermo, Sicily. Their work is very inspired by the creations of their father...

Contact me about this item   Back to home   Back to Others