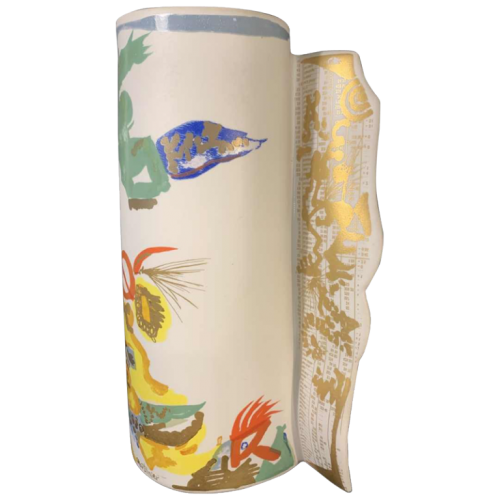 Large porcelain vase by Gilbert Portanier and made by the porcelain factory ROSENTHAL Germany.
Vase signed by the artist (in the decor) and by the publisher (see photos).
In perfect condition

Biography:
Gilbert Portanier was born in Cannes in 1926.
Around the age of 17, he felt a taste for the arts born in him. In 1945, he left for Paris to study architecture at the ENSBA, he quickly turned to painting and drawing, which he soon studied as an autodidact.
In 1948, after a stay in Brussels, he returned to the French Riviera where, during a visit to Vallauris, he discovered the world of ceramics and met Picasso. In 1949, he created, with his friends Albert Diato and Francine Del Pierre, a small workshop, which they called "Le Triptyque", where they began to learn self-taught ceramics together.
In 1954, he moved to a traditional pottery where he would have large workshops, found a mythical place of ceramics where all the possibilities of a still virgin art were available to him. He learns the multiple techniques that are attached to it and creates his own figurative, abstract, suggestive language, materialized by versatile graphics of great freedom. Its color palette betrays the painter's sensitivity through its richness and intensity. For Portanier, ceramics are a way of translating feelings, emotions, and the pleasures of life. He is a colourist and enamel connoisseur, just like a drawing virtuoso.
In 2018, creation of the Gilbert Portanier Foundation located at 8 Chemin des Potiers in Vallauris.

Since 1964, Gilbert Portanier has been in contact with the German porcelain maker Rosenthal, for whom he will soon create very original models (in which we find his brand) which will experience great international success.
From 1966 to 2009, he exhibited regularly in the Rosenthal Studio-Häuser in Hamburg, Bochum, Dortmund, Cologne, Mannheim, Stuttgart, Paris, Milan, Geneva, Amsterdam ...