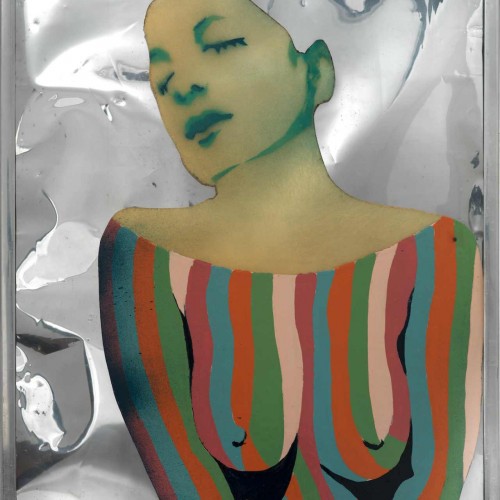 Painting / Pop'Art Table on Clartex, Aluminum Sheet stretched on a canvas on stretcher.
Signed "Axel" for Evelyne Axell. Titled and re-signed on the back "La Prisonnière". Date and stamps on the back (1968).
Work exhibited in 1969 in Ghent at the "Galerie Foncke", in 2019 at the "Maison de la Culture de Namur".

Biography:
Forgotten for many years, Evelyne Axell, pupil of René Magritte, is now considered the queen of Pop'Art and relocated in many museums to her counterparts Andy Warhol, Roy Lichtenstein, Jim Dine, Marisol, Martial Raysse, Richard Hamilton , ...
Axell is one of the few female artists representing pop art in Europe.
Born in Belgium in 1935 into a middle-class family, she took courses in ceramics at the École des Beaux-Arts in Namur in 1953. She then entered the Conservatory of Dramatic Art in Brussels, where she became an actress and television presenter.
In 1963, she devoted herself entirely to painting with the advice and support of her. professor René Magritte. Influenced in the 1960s by New York artists, she turned to pop art, which she discovered in London. She experiments with new plastic materials including Clartex that she cuts, playing with reliefs and transparencies.
Her remarkable work focuses on the theme of the sexual liberation of women.
She died at the age of 37 in a car accident in 1972, only 9 years of rich artistic production ....