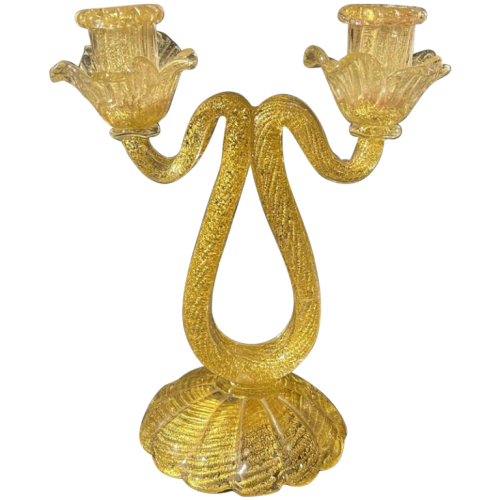 Candlestick / Candelabra in Murano glass worked with the clamp and inclusions of gold glitter.
By Ercole Barovier for Barovier & Toso in Murano, ca 1940 - 1950.
Perfect state

Barovier e Toso:
The Fratelli Barovier company was founded in 1878 by Giovanni Barovier and the sons of his brother Antonio (Giuseppi, Benvenuto and Benedetto). They had all worked in Murano as glassblowers for Dr Antonio Salviati since 1866.
In 1883 they took over the Salviati glassworks working with Antonio Camozzo, director of the Salvati glassworks.
From 1927, the company was called Vetreria Artistica Barovier & Co and Ercole Barovier was its main designer. This company will be liquidated in 1936 to rename itself Ferro Toso Barovier Vetrerie Artische Riunite SA.
From 1942, the company will be called Barovier & Toso with Artemio and Decio Toso as directors and Ercole Barovier as director.
Since 1990 the general manager is Jacopo Barovier with Giovanni Toso as production manager with branches in Milan, Tokyo, Hong Kong and Moscow ....
During the 1950s, the company will collaborate with contemporary designers of great renown such as Anish Kapoor, Tom Dixon ....