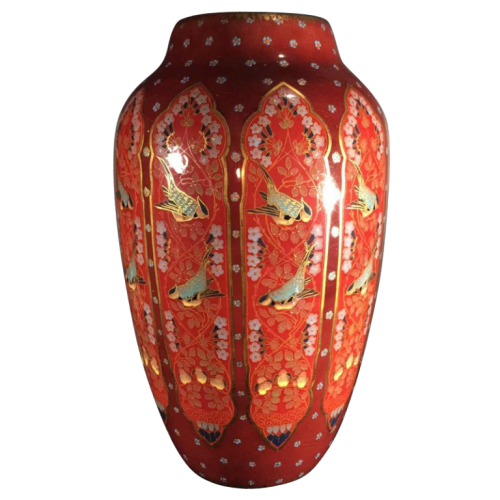 Rare vase with the tits, exceptional quality of realization. Japanese decoration announcing with avant-gardism the arrival of the Art Nouveau movement.

They produced ceramics beginning in 1867. Similar to Zsolnay, Fischer also specialized in the production of ornamentally decorated ceramics, with a perfect mastery of cloisonné enamel ( enamelled) . He was successful mainly with his Majolica ware, sold in Austria-Hungary and also sold for export. Fischer also produced pieces decorated with Chinese motifs sold at the Hungarian Exposition of 1885. He was successful in winning many major awards. Eventually his son Emil took over the operation. But by 1885, the factory slowly began to lose its standing and eventually became the property of the Zsolnay Factory in Pécs in south west Hungary. Some have asserted that Zsolnay bought out the Fischers to put them out of business in favor of his own.