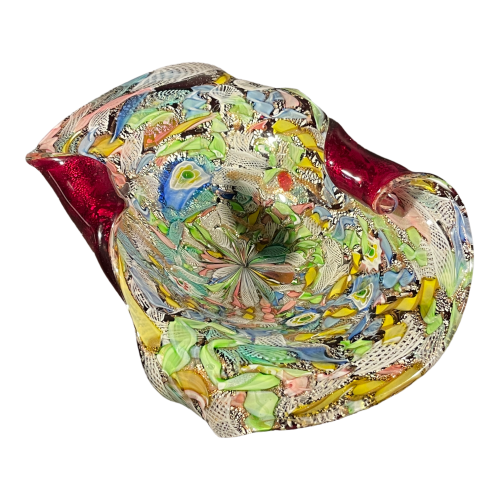 Dino Martens (1894-1970) was an Italian painter and designer particularly noted for his work in glass, trained at the Accademia di Belle Arti. He exhibited at the Venice Biennale from 1924 to 1930) and later became the artistic director of the "Vetreria Fratelli Toso" (a famous Venetian glassworks). There he produced many remarkable works, using traditional Venetian techniques but producing original effects, "daring" asymmetrical forms, the designs often marked by their obvious difficulty of execution.


Founder of the company "Vetreria Fratelli Toso", Aureliano Toso comes from a family of glassmakers long established in Murano. From the very beginning, he collaborated with the Italian painter and designer Dino Martens, so much so that in 1942, the company's first series of design objects was presented at the XXIII Venice Biennale. These featured bands of contrasting colours. Thick-walled, spiral-shaped glasses with inclusions of different colours were also created. In the early 1950s, Martens created the 'Eldorado' series of glasses in transparent ground glass and the 'Oriente' series in opaque ground glass, with bold shapes that prefigured the future of Pop Art. Some of the objects feature moray eels made of multicoloured glass rods. However, until Martens' departure in 1960, simpler series of objects were created, such as the Puligoso series, decorated with coloured spots. Later, designers such as Gino Poli and Enrico Potz worked in the factory, which was then passed on to the founder's son, Gianfranco Toso. Since 1968, the glassworks has been producing lamps under Poli's leadership and based on his experience at Venini & Co.