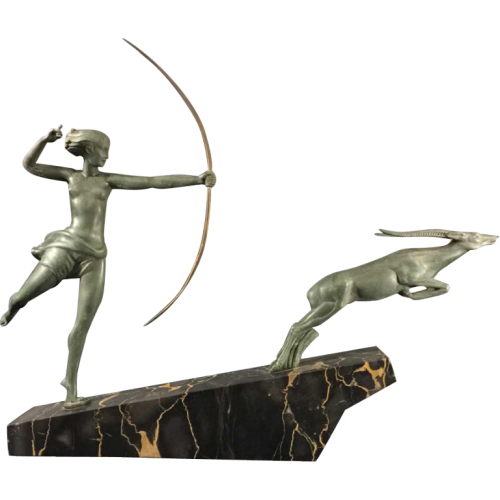 Signed on the terrace of a pseudonym DEMARCO for Max Le Verrier.

Base of the Antelope is also marked with a stamp "FRANCE" also used by this foundry.

We do not speak here of pure bronze but of a bronze alloy proper to Max Le Verrier.

Max le Verrier was born near Paris, in 1891. He studied at the Ecole des Beaux-Arts in Geneva where he met his fellow sculptors Pierre Le Faguays and Marcel Bouraine with whom he worked for a long time.

In 1919 he created his own studio in Paris and created his first and famous sculpture "Pelican", this one will be the first of a long line of figures of women and animals of Art Deco style. Le Verrier received a gold medal for his sculptures at the 1925 Decorative and Industrial Arts Exhibition in Paris. In 1926, Le Verrier opened his own foundry, making pieces for a large number of French sculptors of the time, including Pierre Le Faguays, Marcel Bouraine, Janle, Denis and Charles. From the beginning, he has earned a reputation for the very high quality of work, the exceptional details and the precision of the items produced by his company. It is interesting to note that the foundry did not cast bronze as is generally assumed, as the Verrier believed he could get better details using his own mix of metals. In parallel with the management of his foundry, the Verrier continues to carve his own creations and, in the 1920s, he became famous for his studies on women as part of the fascination of the Art Deco era for the ideal female form. Her feminine figures are characterized by light athleticism and perfect symmetry. Le Verrier continued to work during the 1930s - receiving a medal of honor at the Paris International Exhibition in 1937.