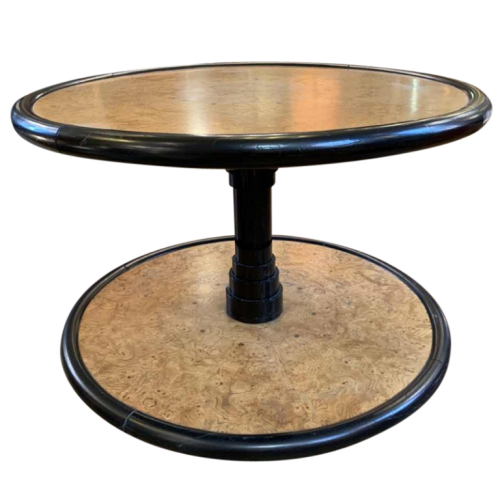 Modernist / Constructivist Art Deco Coffee Table attributed to De Coene Frères (Kortrijk) from the 1930s.
Two circular maple burl tops and a central barrel base in ebony, the belts are also in ebony.
The upper plate is rotating (on vintage rolling balls). It can also be moved very easily (rolling balls under the table).
In good condition, it has been restored and finished with a satin varnish, polished appearance without the inconvenience of stains ...
Rare model, rather untraceable.

1887 is the year in which De Coene's story in Kortrijk begins. During the interwar period, the company gained international fame for the production of high quality Art Deco wooden furniture. Based on the Arts and Crafts philosophy, the company will call on great artists and architects, including painter Albert Saverys.
Besides the individual sale of furniture to the well-to-do bourgeoisie, the company is also responsible for custom furniture for restaurants, hotels, casinos, trains, banks and other large institutions. Orders from abroad (France, the Netherlands and United Kingdom) poured in and the company became one of the most important furniture manufacturers in Belgium and its reputation then became international.
We will also note a mass production from 1929, up to 1000 radio cabinets per day are produced for Philips Eindhoven.
At the end of the 1930s, more than 3000 people were employed in the various departments.
The company is still in business today ...