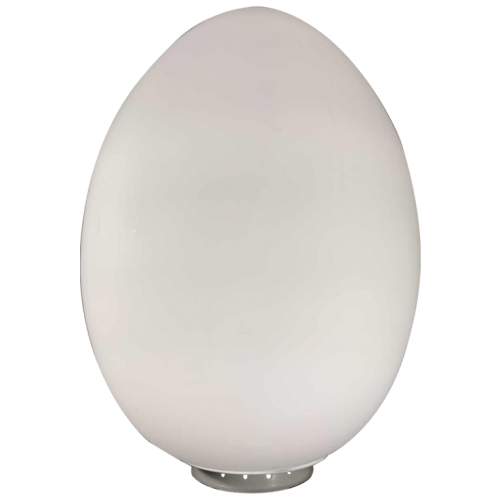 Large design table lamp in frosted glass from FONTANA ARTE and created by the Dutch designer BEN SWILDENS in 1972.
From a pure, minimalist and timeless line, it is the largest existing model.
1980s edition.
In perfect condition.

Biography:
Collaborator of Max Ingrand, Ben Swildens is a Dutch designer born in 1938. His father was an architect and he spent his childhood traveling a lot. In Morocco, at the American school in Tangier, he learned Arabic and Spanish and discovered drawing by imitating his father.
He followed the courses at the École Polytechnique in Switzerland,
In 1961, he graduated from the École Supérieure des Arts Décoratifs in Paris.
He began his career working for his teachers, great creative craftsmen of the time, as well as for private companies.
From 1962 to 1969, he collaborated with the French master glassmaker and decorator Max Ingrand on many projects such as the headquarters of EDF and Peugeot, the airport of Lima, the Parliament of Beirut and the Museum of Geneva. With his brother-in-law Bernard Cohen (future founder of the Parisian boutique Merci) Swildens launched Point, the company that produces and sells the furniture he designs.
The two men were related through their wives, the Goutal sisters, who had created the BonBon brand, and from this happy union was born the Bonpoint 1972 brand, for which Swildens designed the first stores in France in the United States.
In 1985, he founded Ben Swildens Design Architecture, focusing on individual residences. Architect and designer, he has mainly devoted himself to sculpture since 2010.