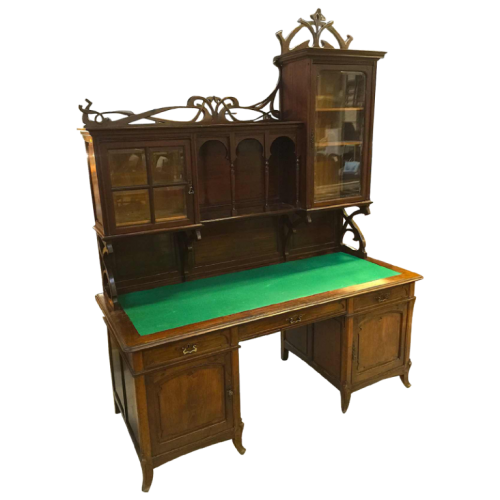 Art Nouveau ( Liberty ) mahogany desk composed of 2 low pedestals with doors and a shelf with 3 drawers. The shelf is topped with shelves and showcases with doors.
Finishes in volutes and carved and openwork lashes.
Locksmiths and fittings in typically Art Nouveau brass.
Belgian Art Nouveau School, in the spirit of Paul Hankar.
Beautiful state of conservation, no lack.
Ideally, change the felt on the tray and wax the whole.

The international influence of Belgian Art Nouveau:
On the sidelines of the Universal Exhibition of 1897 which took place in Brussels, King Leopold II organized in Tervuren (near Brussels) an exhibition intended to show the outlets offered by the Congo, which was then his private property. This exhibition was divided into four sections, the design of which was entrusted respectively to Paul Hankar, Georges Hobé, Henry Van de Velde and Gustave Serrurier-Bovy, including a lounge of honor designed by Hankar. The frame designed by Georges Hobé was reassembled in the gardens of the Royal Museum for Central Africa in Tervuren.
Art Nouveau in Brussels strongly influenced France, Germany, the Netherlands and the Vienna Secession.
Victor Horta influenced the Parisian Hector Guimard (who came on a trip in 1895 to Brussels to meet Horta and Hankar) and the Viennese Otto Wagner, Henry van de Velde influenced Germany and the Netherlands, ....