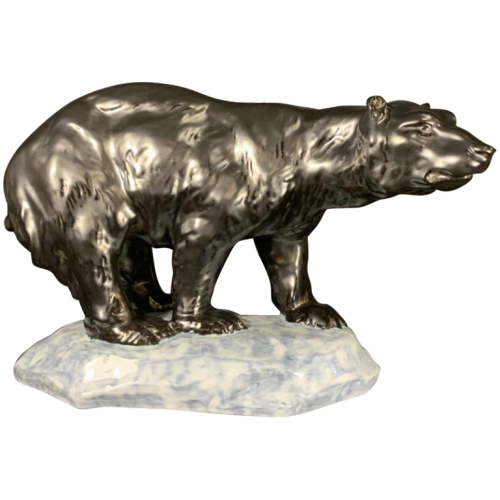 Art Deco black ceramic polar bear produced around 1930 by the Belgian sculptor ANTOON AMORGASTI for CERABELGA in Haren.
In a perfect state.
An identical model and several similar bronze bears sculptures are represented in the catalog (see images).

Antoon Amorgsti is an Italian sculptor born in Pisa in 1880 and died in Antwerp in Belgium in 1942.
He lived mainly in Belgium and followed his artistic training at the Academy of Berchem and worked as a moulder in the workshops of animal sculptor Josué Dupont during the Belgian Art Deco period. Like Albéric Colin, Thierry Van Rijswijk, Raymond de Meester, Domien Ingels, he drew inspiration from the animal subjects of the Antwerp Zoo, including lion, panther, elephant and bear. He mainly creates animals in bronze, terracotta or plaster but also animal ceramics in black for Cérabelga in Haren on pedestals in white blue green shades.

Cérabelga was a Belgian pottery specializing in the production of stylized and typical art deco objects. Like Boch frères Kéramis, AMC or even Saint Ghislain, the geometric and modernist cloisonné enameled vase was a reference in their production.