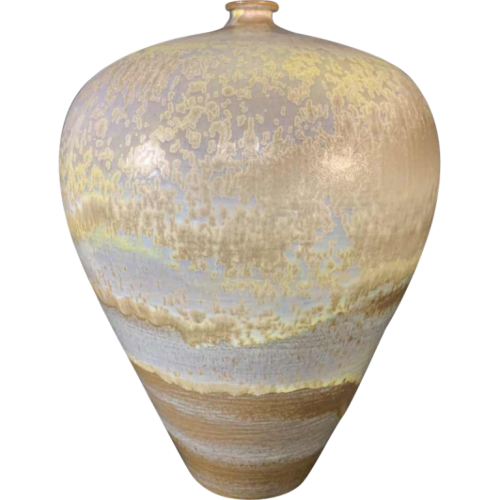 Ovoid shape vase called " ball vase " with small narrow neck and shrunk in ceramic, made by Antonio Lampecco in the 1970s.
Green, blue, shaded gray and crystallizations.
In perfect condition
Signed on the reverse

Staying in the same period, one can compare his work to certain artists like Jacques and Dani Ruelland.

Antonio Alberto Lampecco (Minucciano, 1932) is a Belgian ceramist. He is known for his round and spherical vases, often of blue pigment with small, tight necks. He moved with his family to Maredsous in 1949 where he acquired Belgian nationality, he then opened his own studio in Maredret (Namur, Belgium). He has exhibited in the Netherlands and abroad in important cities such as Florence, Paris and Lisbon. His ceramic works have won gold medals. Some of his works are in the ceramic museum of Andenne.