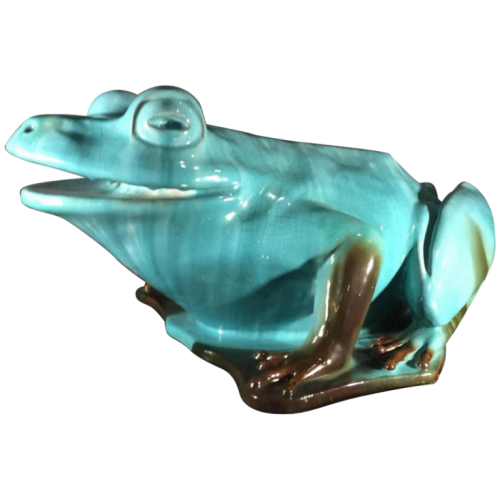 Marked oval stamp Clement MASSIER Gulf-Juan A. M. (Alpes-Maritimes) on the base.

A single similar model sold in public sale and awarded € 7500 at "Gérald Richard" in 2016, see attached image or on their website.

Clément Massier is considered as the founder of the early twentieth century industry ceramic Vallauris. Of a creative nature, Clément Massier (1844 Vallauris - 1917 Golfe-juan) was first working in 1856 with his father Jacques (1801-1871). He was introduced to pottery by Gaetano Gandolfi, an Italian master potter hired by his father. Gandolfi will be the initiator of several techniques, among which enamelled earthenware, which will make the reputation of the house Massier. From then on, the production is distinguished by its originality, utility pottery abandoned in favor of an exclusively artistic creation.

The companies Massier, led by brothers Clement and Delphin and cousin Jerome, formerly a major production of Vallauris.