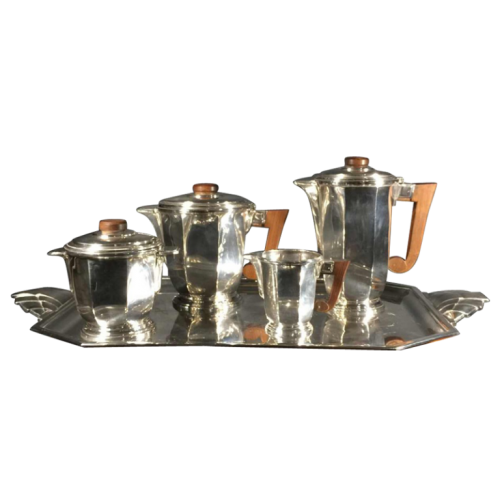 Coffee and tea set Art Deco in Maillechort, silver metal also called white metal or Alpaca, a silver metal in the mass that does not wear out.

The frets and handles are rosewood.

Complete and in good condition.

Includes 5 pieces including the tray (to report, 2 slight bumps in the tray).

The house specializes in silverware and goldsmiths. For silverware cutlery, the nickel silver models are manufactured at the Mouroux cutlery factory created in 1895 by Louis Ravinet in Seine et Marne.

In 1923, Louis Ravinet and Charles d'Enfert entrusted their sons André Ravinet (1889-1971) and Jacques d'Enfert (1900-1982) with the management of the company by setting up a limited liability company.

The house exhibits regularly and receives numerous awards: gold medal at the Lyon exhibition in 1894 and at the Brussels World Fair in 1897. It is also present at the major exhibitions of 1900, 1925 and 1937. Several leading designers including Georges Roger Latouche, Adolphe Truffier and Roger Tallon have their creations published there. Qualitative work reminiscent of Luc Lanel's style for Christoffe or Gallia.