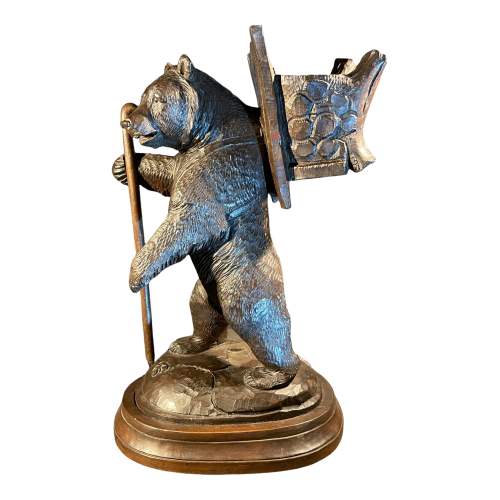 Black Forest carving, rather from Switzerland, Brienz region, dating from the end of the 19th century.

"More real than life, standing tall, the carved bear is the star of the Swiss mountains". Preconceived ideas are hard to come by. Coat racks, umbrella stands, hat racks and wooden trinkets featuring bears are still often attributed to workshops in the Black Forest, one of the animal's territories in Europe. Yet there is clear evidence that these delightfully kitsch furnishings, which have remained stable year after year, were made from the middle of the 19th century onwards by the inhabitants of the Brienz region in Switzerland. They were originally intended to occupy the long winter evenings. They were soon in great demand by tourists. The craftsmen, understanding the benefits they could draw from them, became artists in order to better capture the animal ( and hunting game birds and furry animals... such as roe deer, hares, foxes, ibex, capercaillie, partridges... ) in its veracity, sometimes giving it a human appearance... Until the First World War, from which these bears did not recover, they made the most of this corner of the mountain.